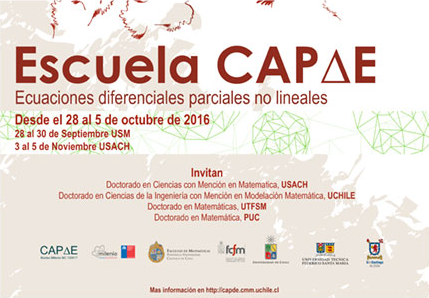 Title: Nonlocal equations in phase transitions, minimal surfaces,crystallography and life sciences.
Abstract: We would like to give an introductory presentation of some equations which exhibit some nonlocal phenomena.
Often, the nonlocal effect is modeled by a diffusive operator which is (in some sense) elliptic and fractional.
Natural examples arise from probability, geometry, quantum physics, phase transition theory and crystal dislocation dynamics.
We will try to discuss some of the mathematical tools that are useful to deal with these problems, explain in detail
some of the main motivations and describe some recent results on these topics.

Title: Adaptive evolution and concentrations in nonlocal parabolic PDE’s
Living systems are subject to constant evolution through the three processes, stated by C. Darwin, of population growth, selection and mutations. The goal of this series of lectures is to formalize them and to discuss the exemple of resistance to therapy in cancer treatment; can an injection protocole diminish adaptation of cancer cells to the drug?

In a very simple, general and idealized description, the environment can be considered as a nutrient shared by all the population. This alllows certain individuals, characterized by a ‘phenotypical trait’, to proliferate faster because they are better adapted to use the environment. This leads to select the ‘fittest trait’ in the population (singular point of the system). On the other hand, the new-born individuals can undergo small variations of the trait under the effect of genetic mutations. In these circumstances, is it possible to describe the dynamical evolution of the current trait? A new area of population biology that aims at describing mathematically these processes is born in the 1980’s under the name of ‘adaptive dynamics’ and, compared to population genetics, considers usually asexual reproduction, a continuous phenotypical trait and population growth.

We will give a self-contained mathematical model of such dynamics, based on parabolic equations, and show that an asymptotic method allows us to formalize precisely the concepts of monomorphic or polymorphic population and describe the evolution of the ‘fittest trait’. Mathematically, the interest comes from concentration effects after an appropriate rescaling. The solution converges to a (sum of) Dirac mass(es) supported on a hypersurface that results from the nonlinearity. The difficulty is to evaluate the weight and position of the moving Dirac mass(es) that desribe the population. We will show that a new type of Hamilton-Jacobi equation, with constraints, naturally describes this asymptotic. Some additional theoretical questions as uniqueness for the limiting H.-J. equation will also be addressed.