Our research program is constituted by challenging problems of high current interest in the Partial Diﬀerential Equations (PDE) community.

Its analysis is one of the most active branches of modern mathematics and it focuses on the continuous modeling of complex phenomena in nature. Seemingly simple PDEs hide an incredible richness in the structure of their solution sets. Finding a general theory that describes them may be impossible, given the high complexity of those objects. Natural, often diﬃcult goals are to shed light on qualitative features of the equations and to ﬁnd families of solutions that enjoy geometrically meaningful patterns. 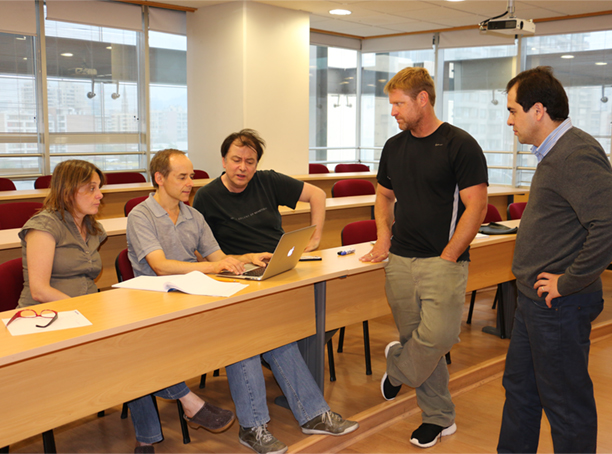 OBJECTIVES OF THE NUCLEUS

The research will in particular involve new collaboration of Dávila – del Pino – Musso with Quaas in non local problems, and with Henao in Cavitation Fracture theory by singular perturbation methods.

To train young researchers in the topics of the program

Recruitment of new students and postdocs, and he involvement of new young, excellent researchers in PDEs that will integrate the Chilean system in the next two years.

And the involvement of renowned experts in a program of research visits that includes the realization of short courses of their expertise.

To carry out activities contributing to mathematics awareness in society

in association with the EXPLORA science diffusion program by CONICYT (National Science Agency) and in the long term, to position this group as a highly prestigious international center for non linear analysis

This part of the project deals with the analysis of singularities in evolution equations of parabolic type. This area sits within a field of great scope stretching from fundamental questions in fluid dynamics, geometry and modeling of biological pattern formation. At the heart of each of the topics above lies an evolution PDE of parabolic type, with key research challenges that are remarkably similar. Each of these equations could be perhaps a law of physics, or an equation modeling an industrial or biological process. Smooth solutions to evolution geometric PDE have been extremely successful in applications to pure and applied problems. The most famous application in recent years has been the resolution of the Poincaré conjecture, which was named by the journal `Science’ as the scientific `Breakthrough of the year, 2006,’ but is considered by many to be the greatest achievement of mathematics in the past 100 years.

In 1998, Francfort and Marigo proposed a variational model for fracture mechanics, in analogy to the well-known model by Mumford & Shah (1989) in computational image segmentation. In this model a fracture is conceived as the discontinuity set of the displacement function of the material. The propagation of the fracture is associated to the minimization of a functional among configurations where these discontinuities are allowed. For the theoretical model of cavitation and fracture for ductile materials and incompressible polymers, Henao and collaborators have formulated and analyzed a relaxed energy functional in which the test functions are smooth with large gradients on a thick interface, interpreted as the “damage zone”. This approximation theory, in the spirit of that by Ambrosio & Tortorelli (1990) for the Mumford & Shah functional, is crucial for the numerical simulation of fractures. The relaxed energy involved has strong analogies with the Allen-Cahn and Ginzburg-Landau functionals in the theories of phase transitions and superconductivity, which have been broadly treated in the PDE and Calculus of Variations literature. On the other hand, the relaxed functional in fracture mechanics involves heavy technical challenges, such as lack of convexity in the gradient terms and its vector-valued character.

Singular integrals and nonlocal (especially fractional) operators are a classical topic in harmonic analysis and operator theory and they are now becoming impressively fashionable because of their connection with many real-world phenomena. Our main purpose in this part of the project is to develop and apply singular perturbation techniques to questions involving fractional elliptic operators.