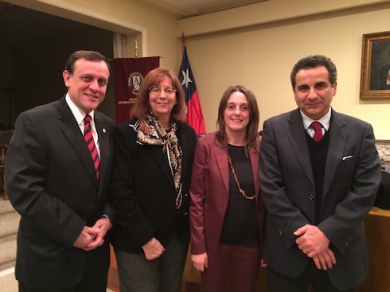 “Science is a real possibility to any woman who’s interested in it” Mónica Musso,  a researcher at Millennium Nucleus for the Analysis of Partial Differential Equations CAPDE, pointed out during the ceremony that took place on july 20 2016 celebrating her incorporation to the Chilean Academy of Science, which would make Musso the second female mathematical scientist to ever join the Academy.

“Mónica stands out for her work in supporting female participation in science, awakening an interest towards mathematics in girls and making the specialty a more inclusive area” said Virginia Garretón, executive director of Millennium. “We trust that in her new role she’ll continue working towards making Chile a world reference in mathematical research and a better country” she added.

During the event, Musso offered a speech titled “Laplaciano, Women and Asymptotic Patterns”, in which she explained how since the beginnings of the XX century the number of women active in mathematical research has grown. So in the International Congress of Mathematicians in 1990 only one woman participated, but in 2014 the number grew to 22. Another data she divulged was that out of 56 mathematicians who have won the Fields Medal, equivalent to the Nobel Prize, since its creation in 1936, the only awarded woman has been iranian Maryam Mirzakhani in 2014. “Personally I can testify the importance of having role models and friendship from other mathematician female colleagues. However, I believe more female mathematicians are need to demonstrate good theorems and continue to contribute to our career” Musso concluded. Meantime, she also presented the Chilean Female Mathematicians Collective, to which she belongs, adding that there are still subtle barriers making the choice of a mathematical career a mainly masculine one.

On the other hand, Musso pointed that her appointment recognizes PDE “as a rigorous and universal language”, given they describe continuous processes very different from themselves, and which appear in such varied disciplines as physics, biology and economy, amongst others. “However, the study of PDE is pretty challenging by itself, since many elementary questions are still open, which generates an intellectual challenge very attractive to mathematics”.

The ceremony was directed by the Academy’s President María Teresa Ruiz and Patricio Felmer, member of the Chilean Academy of Science and a senior researcher in CAPDE. Amongst the assistants was the Rector of the Pontificia Universidad Católica de Chile (UC) Ignacio Sanchez and the dean to the Mathematics Faculty at UC, Martin Chuaqui.

Mónica Musso of italian nationality is a professor at the Mathematics Faculty of the UC, she got her Phd in the University of Pisa in 1998 and has published more than 90 articles in prestigious international magazines since. Her area of expertise is the analysis of PDE of the elliptical and parabolic kind, particularly, the study of existence and multiplicity of solutions and their qualitative properties.