The work of the Center for Nonlinear Analysis & Partial Differential Equations (CAPDE) with universities in the Asian country, enhances the quality of research in mathematics in Chile.

Since Wuhan University first hosted the Chile-China Congress in 2010, cooperation between the two countries has been very fruitful. Between 9 and 12 December 2016, Wuhan University was once again the venue for this meeting. “Third Sino-Chilean Conference on Nonlinear PDES and Nonlinear Analysis,” brought together mathematicians from our country and the Asian giant, all of them specialists in nonlinear partial differential equations (PDE). In particular, in the study of solutions for nonlinear parabolic and parabolic problems and systems of e 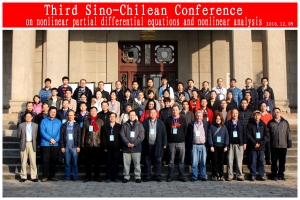 quations, related to Differential Geometry, Physics or Biology, among others.

The day began with the CAPDE researcher , Manuel del Pino, who spoke about the uniqueformation of the flow of the harmonic map in S^2. On the second day, Monica Musso presented the talk “Infinite-time bubbling in the critical nonlinear heat equation”. From his part, Juan Davila addressed the Holder estimates for solutions of a MEMS equation. The fourth CAPDE researcher who attended the congress was Ignacio Guerra, whose presentation was entitled “Multiplicity of solutions for an elliptic equation with a singular nonlinearity and a gradient term”.

The congress also had the participation of Wenming Zou (Tsinghua University) and Feng Zhou (East China Normal University). In addition, Aliang Xia, from Jiangxi Normal University, offered the talk “Principal eigenvalues ​​of fully nonlinear integral-differential elliptic equations with a drift term”, the results of which are part of the work with CAPDE researcher, Alexander Quaas.

At present, professors from Wuhan University together with CAPDE members conduct a high-level research. “It’s a great opportunity for us, because of the great potential and the singularity of this collaboration,” said Ignacio Guerra. “Our objective is that these kinds of instances continue to strengthen the ties between Chile and China, and thereby generate greater scientific productivity,” he added.