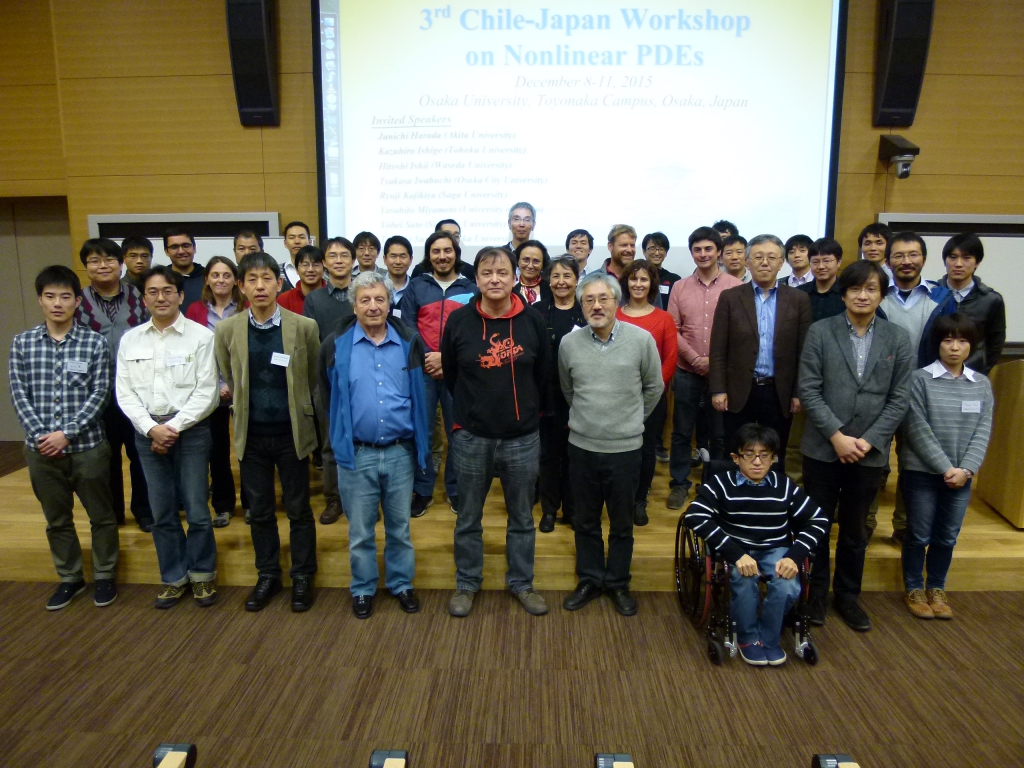 The third  workshop Chile-Japon on Nonlinear PDEs, which was partly supported by CAPDE along with Japan funding, took place in Osaka University from 8 to 11 December 2015. It was aimed to bring together experts in the field of nonlinear partial differential equations from Chile and Japan. The meeting was intented to present recent advances in the area, whose problems play a key role in modeling biological pattern formation, mathematical ecology, material science and superconductivity, among other fields.
“It is very important for the Chilean and Japanese groups the interaction, to know what the others are doing, as well as to strengthen the possibility of postdoctoral exchanges”, pointed out Manuel del Pino, main researcher of Capde.

Topics covered included semilinear parabolic system, singular perturbation problems or competitive system of chemotaxis. The event was attended by 60 people and 22 speakers, 11 of them from Chile. So, Del Pino, in his abstract “Bubbling in the critical heat equation: the role of Green’s function”, explained the point-wise, infinite-time bubbling phenomenon for positive solutions of the semilinear heat equation at the critical exponent in a bounded domain. On the other side, Claudio Muñoz´s abstracts was entitled “Dispersive estimates for rational symbols and local well-posedness of the nonzero energy NovikovVeselov equation”. Alexander Quaass talked about large solutions for some local and non-local nonlinear elliptic equations Break and Mónica Musso foucused on a non-compactness result on the fractional Yamabe problem in large dimensions. Also Ignacio Guerra shared his investigation, on“Multiplicity of solutions for an elliptic equation with a singular nonlinearity and a gradient term”.
Participants agreed to celebrate the fourth edition of this workshop in 2017 in Universidad Federico Santa María (USM). The first workshop was held in 2007 at the Center for Mathematical Modeling (CMM) of Universidad de Chile and the second in 2010 in Tokyo. For more information, see the website of the 3rd Chile-Japan Worshop on Nonlinear EDPs.